Déag Gealacha, the 13 Moons is an Animist Wisdom Course underpinned by The Stories and Tradition of Sagh’ic Tire Dhream; the Wolven Path Tradition. The aim of the course is to open and connect students to a deeper understanding of living in a ceremonial way and in relationship with the world around them, through a deepening awareness of ritual and animist spirituality.

The 13 Moons is also the Foundation/Core requisite of the Mystical Mountain Apprenticeship.

Over generations we have strayed from a once harmonious relationship with the Earth and the Natural World and in this we have forsaken an innate spiritual state of being in favour of aggressive human survival. This is turn has not only alienated us from the collaborative intimacy with nature, but also created animosity between one another. 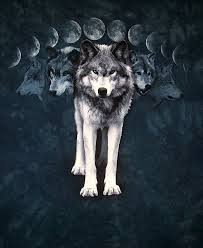 This lunar journey follows the ancient nomadic tribal stories of the 13 spirits of the moons, understanding that journey within ourselves, sacralising it in ceremony and grounding it in new awareness’s of action.

The student will learn about principles that hold this balance and the levels of consciousness, which in turn will open a deeper communicative relationship with the world around them as defined by the 13 Trees that grow in the Sacred Grove which surrounds the Primal Tree of The World.

And in opening an awareness of the qualities of the five elemental energies which will focus and empower their lives, by connecting them to the Wisdom and teachings of the world around them as guided by the energies of the 13 moons.

Please email for full details; there are both a contact and an on-line version of this course.